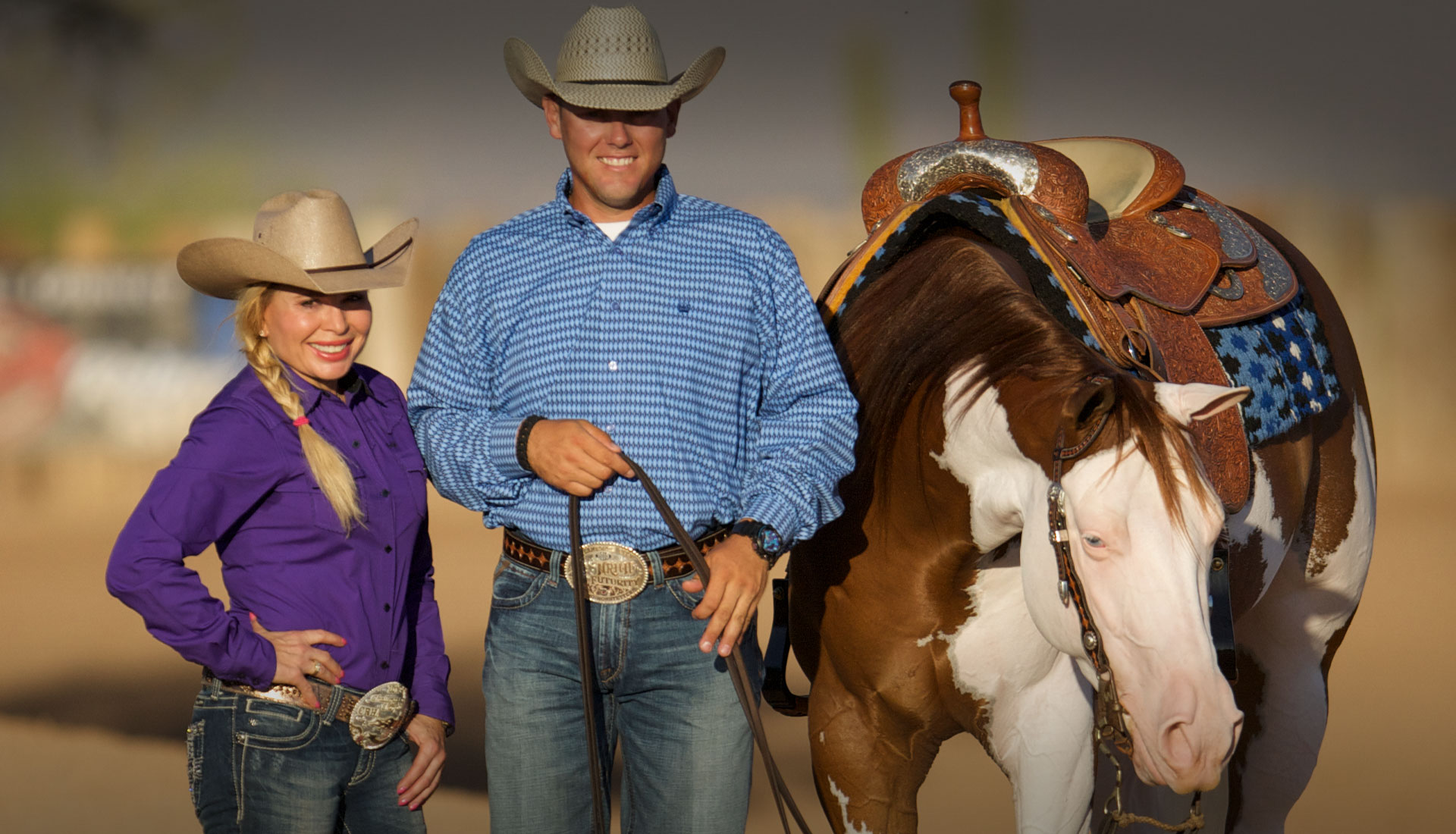 “I was born in Brooklyn and raised in New York City in an apartment on the Upper East Side. I remember very clearly that, as a child, I desperately wished I lived on a ranch out west with horses.” 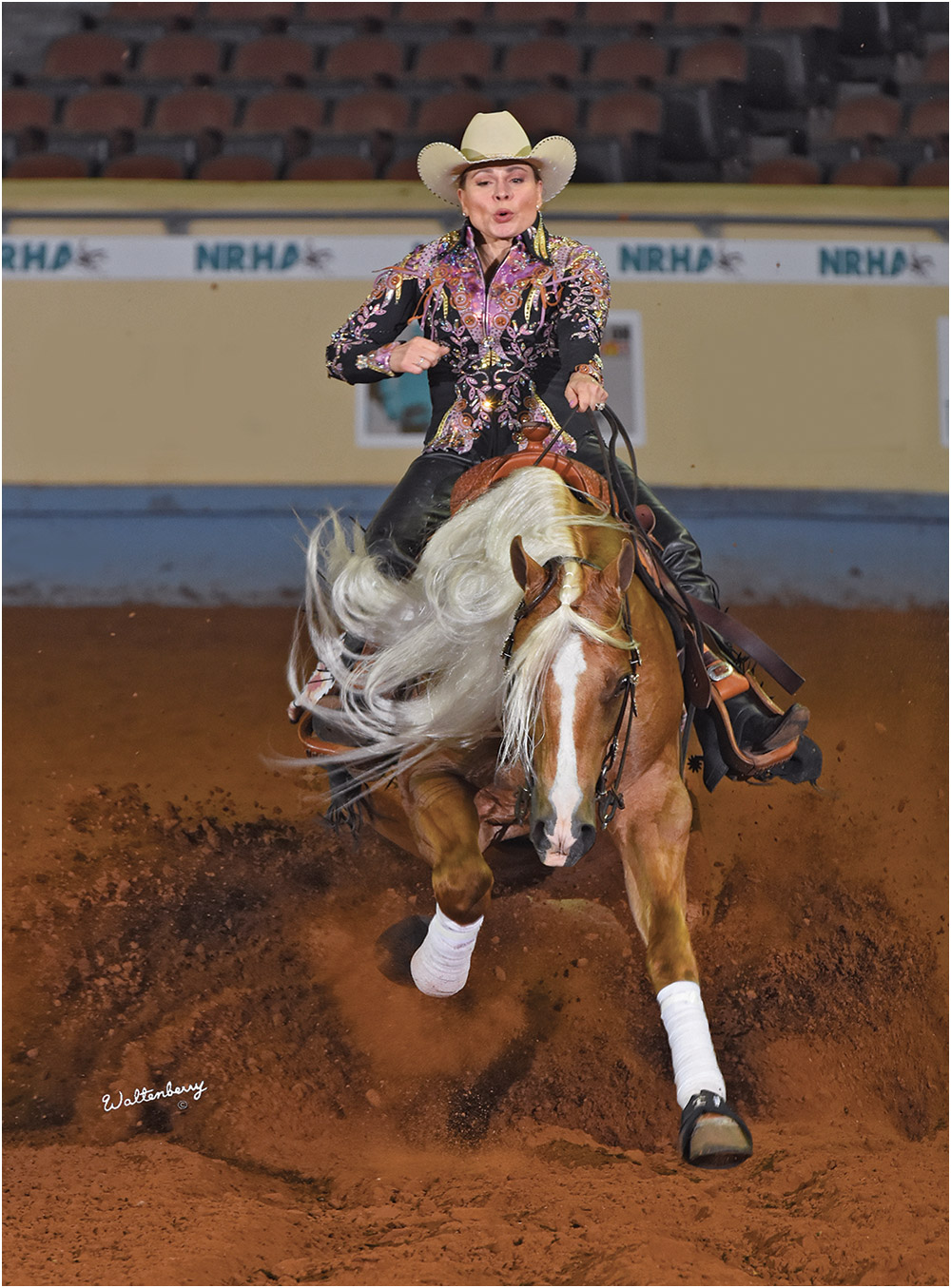 Story Book Stables is the culmination of a lifetime passion for owners Brenda Joyce and Rick Christen. When the pair met at the High Roller Reining Classic in 2013, both were avid Reiners who were breeding show horses for themselves, and happily competing as Non Pros. But that quickly changed.

Brenda had always dreamed of owning horses on a ranch out west, from the time she was a little girl, born in Brooklyn and raised in Manhattan. The daughter of a developer, she refused to go into the family business, and became a bestselling novelist, with 54 published novels to her credit, all in 26 years. When she met Rick, it was time to live out the second half of her dream.

Rick was raised in Toledo, Ohio, and began riding horses as a small boy. His dream of being a pilot in the Air Force was destroyed because of his height, and instead, he wound up racing sailboats—until he decided to go into the family roofing business. When he met Brenda, a reining horse frenzy was unleashed. They began combining forces, sharing horses, swapping embryos, and then they built Five Bells Ranch.

The Ranch is a dream come true for them both. 5 Bells Ranch encompasses 22 acres in the heart of Rio Verde, Arizona. It includes a 41-stall state of the art show barn, a 280 x 150 covered arena, a covered round pen and walker, numerous turn outs, irrigated front pastures, another state of the art mare motel, three casitas for employees, other apartments, and more. Set on both the east and west sides of 138th Street, the east side is for the mares, babies and yearlings, and the training operation is on the west side.

Story Book Stables was conceived as a small limited operation for a non Pro. If Brenda had been asked back in 2010 what the future would have looked like, she would have never imagined that the operation would become so large.

“I started breeding for myself, as did Rick, because it is exciting to breed the horses you have shown. We were breeding horses for us, to personally show. When I bought a Star Spangled Whiz colt for myself, I got carried away because I liked him so much, so I bought Star Spangled Whiz, himself, and suddenly I was in the stallion business.”

And that was only the beginning—a very fortunate first step in the operation’s evolution. Story Book Stables began promoting and breeding SSW and Wimpy’s High Bid, whom Brenda successfully showed after he ended his open career with Jason Vanlandingham. But when Brenda and Rick married in 2017, everything really changed.

“We realized what we had as a combined force—how many horses we had in training, how many babies on the ground, how many yearlings. Between the two of us, we had a dozen really great mares. It was time to take SBS to the next level—to go big time.”

Story Book Stables is now committed to a small but elite breeding program.

“So instead of focusing on our studs, we are focused on our mares. People think we only breed to our stallions, but we breed far more often to outside stallions like Gunnatrashya and Voodoo. We have a great crop of Twos this year and a great crop of yearlings.”

Brenda adds, “I feel really strongly about the moral responsibility we have as breeders to put great-minded and athletic babies on the ground, and get them into the right programs. For those that sell later, my goal is to give them a great foundation, and make sure they have jobs for the rest of their lives.”

In 2019, Brenda realized it was time to seriously begin and develop an Open program. “I’m not sure when we were bitten by the Open bug, but for sure, in 2019, I wanted my trainers on Open horses, especially at the Futurity—not on my Non Pro horses, trying to make the Open Finals.”

Story Book Stables purchased the 3 year olds Frozen Princess and Super Marioo, the two year old Blue Inferno, and another 3 year old, Shine Dolly Shine, to begin their Open program. The rest is history with Cade McCutcheon’s historic win on Super Marioo at the Futurity in not just the Open, but in Level 2 and 3 as well. “What a way to end the first year of our Open Program!”

Meanwhile, to further strengthen their position in the industry, and to alleviate any confusion, Brenda and Rick are forming Story Book Partners, an arm of SBS. Going forward, every horse owned and bred by Brenda and Rick will be a Story Book horse.

Finally, an integral part of the SBS program is their commitment to the NRHA, its future, and its entire membership. Basically, SBS is focused on supporting the smaller owner/competitor and the older Primetime and Masters riders.

Brenda sums it up best. “I worry about how elite this industry is, and how sad it would be if this became a sport only for the wealthy.

It really feels like there’s a forgotten strata in the membership, those one and two horse owners, those small ranchers, who work their butts off every day to make a buck, who pay through the nose to go to one show, and then what? How can they not feel that the deck is stacked against them? So many of us are on these fancy expensive horses, taking home the trophies and the buckles! And then there’s all those Non Pros who are over fifty. And today we have this generation of young superstars competing, making it really tough for the older rider. So we need to beef up the Primetime and Masters to validate those levels, as well.

Both groups deserve an arena to play in. An arena where they have a chance to place and take home a check. Where they can have fun. That’s the bottom line.”

Story Book Stables is committed to engaging and supporting both group This year, in 2020, Story Book Stables is sponsoring an Amateur Derby. The intention is to try to give that forgotten group in the NRHA membership an enjoyable place to compete and have fun. Brenda and Rick fervently hope to be able to sponsor Amateur Derbies at Reining By the Bay and The High Roller Reining Classic as well.